The reishi mushroom is one of the most potent and well-studied medicinal mushrooms. Reishi has a history of use of over 2000 years in China, and it has gained popularity in the West recently. The benefits of reishi are both impressive and wide-ranging. Reishi is known as lingzhi in China and it’s taxonomical name is ganoderma lucidum, but however you say it, this beautiful looking mushroom has an incredible number of benefits.

Having been fascinated with personal development my entire adult life, reishi mushroom earned its place as one of my all time favourite supplements. It makes an individual feel terrific, plus there is some powerful clinical research backing up an intimidating list of health promoting effects.

Perhaps most impressively, reishi is an adaptogen – meaning it increases or decreases certain biomarkers like hormone levels or immune system activity. Adding to this mysteriousness, there is not just one active component in the fungi, but many. In fact, scientist are continuing to discover new bio-active compounds in reishi, and uncovering new potential for those already discovered. When I reviewed the literature to prepare for this article, I was often surprised to see that researchers often didn’t know the exact mechanism behind reishi’s various medicinal effects, though the effects themselves were stark and powerful. There is a sense of mystery underneath this alien-looking fungi.

I tried to write this section at the razor’s edge between including enough science and references whilst making this easy enough for the lay person to understand the medical benefits of reishi. Bear with me.

One of the fantastic advantages of using a medicinal mushroom, like reishi, to treat yourself is the safety of it. Unlike most of Western Medicine’s drugs, reishi is natural and safe. In all the research I conducted for this article, I couldn’t see any examples of side effects or dangers with reishi. This doesn’t mean there won’t ever be any negatives to reishi, but I was unable to find any.

I often encourage my life coaching clients to drink reishi as part of their personal development program. I find reishi particularly potent whenever I am coaching a client on a big breakthrough. 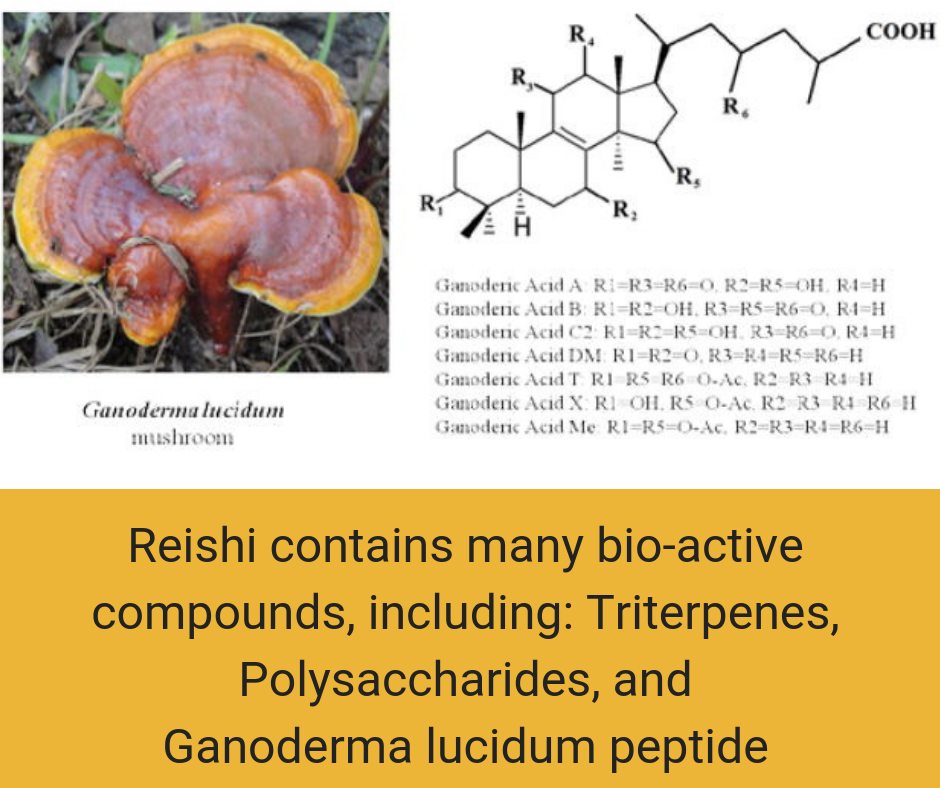 The Bio-Active Components of Reishi

The (so far discovered) bio-active compounds within reishi can be separated into these three categories:

Polysaccharides – chains of sugar monomers
Triterpenes – organic molecules with particular interest to reishi’s anti-cancer properties
Ganoderma lucidum peptide – a short chain of amino acids unique to reishi, the application of which is still being explored.

The bulk of the research tends to test individual extracts of reishi (e.g. just the triterpenes). However, some researchers suggest that the full medicinal effect of reishi may be in the synergistic effects between these various compounds. Just to be safe, whenever I take reishi, I always take the full unfiltered extract made from a whole mushroom.

The Effects of Reishi on Cancer

There have been a number of studies which shows reishi’s ability to prevent and reduce different types of cancer. In one 2004 Study, reishi was shown to be the most effective at killing cancer cells of all 58 medicinal mushrooms tested.

There are a number of different mechanisms proposed for this. One mechanism is that compounds found in reishi mushrooms trigger cancer cells to apoptosis – programmed cell death. This has been researched reasonably extensively across a range of cancers in both tissue samples and live rodents. Reishi mushroom has been shown to reduce the formation of new blood vessels around resource-hungry tumours as well as inhibiting cancer cells ability to move and spread around the body. Reishi has also been shown to boost the function of the immune system, which is another mechanism for fighting cancer.

In several studies where reishi was given to rodents with cancerous tumours, reishi has been shown to significantly inhibit the growth rate of the tumours as well as decrease the size of tumours as well as send the cancer into complete regression in a large percentage of the mice. One study by Kim et al 1980 demonstrates this effect: mice with tumour growth were given reishi extracts over a period of time. By the end of the study, 88% of the mice experienced tumour growth inhibition, and a full third experienced complete regression.

There are far fewer human studies for reishi, but its anti-cancer potency has been shown in those limited cases. In one of a small handful of placebo controlled human studies Gao and Sai et al 2003 treated half of the 68 lung cancer patients with reishi extract and half with a placebo. After 12 weeks, 35.1% of the reishi group reached a stable condition with their disease, compared to only 22.6% in the placebo group. This difference is extremely significant and begins to confirm the extensive anti-tumour effects of reishi seen in mice. Furthermore, reishi has been shown to improve comfort or palliative measures across many of the clinical trials. 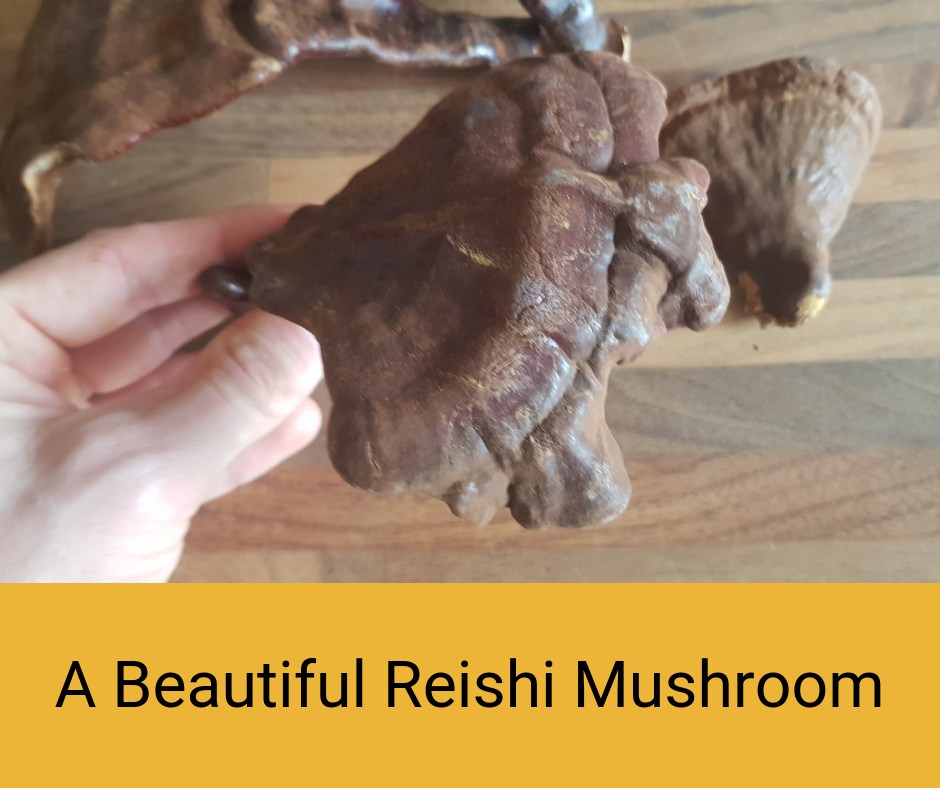 The synopsis regarding reishi and cancer in humans seems to be that more research needs to be done on humans, that it probably encourages tumour regression, that it will make a cancer patient more comfortable whilst they fight the disease, and it is almost certainly a terrific treatment to include alongside mainstream cancer treatments.

Reishi will help you live longer – the mushroom of immortality

Reishi has been shown to increase the lifespan of both mice and C. elegans (a worm that biologists seem to love doing research on). In one C. Elegans study, researchers found that reishi promotes gene expression and proteins associated with longevity. In the mouse studies, life extension of between 9% and 20% have been observed – which is unbelievably long if you convert that to human years! Of course, this doesn’t necessarily mean human life extension will necessarily work the same. However, the intimidatingly impressive array of health benefits across multiple domains of human biology, as well as switching on longevity genes, hints that similar life extension properties can reasonably be expected in humans.

As an adaptogenic herb, reishi has both the capacity to up-regulate or down-regulate the immune response depending on what the body most needs. Reishi has been noted to reduce inflammation across multiple studies, so would be a great natural intervention to try for an inflammation disease like arthritis. However, reishi is also known for up-regulating the immune system. For example, studies have shown reishi extract macrophage, natural killer cells, T lymphocyte and B lymphocyte count both in animals, Petri dish and humans.

Although the specific antimicrobial properties of reishi have not been identified, reishi has been shown to effectively fight some bacterial and viral infections. Some notable pathogens reishi fights against include: 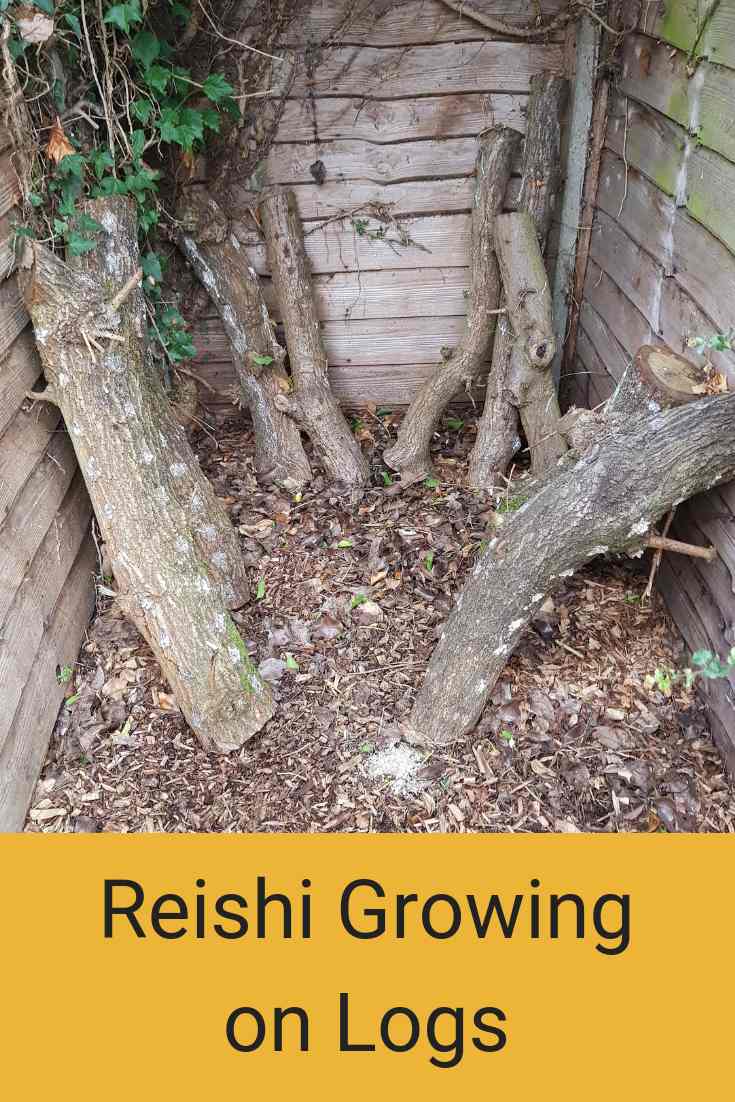 One notable infection which reishi treats is cold sores / herpes. I find this particularly exciting as there are so few effective treatments available for this disease in 2019. In a 2009 study, researchers tested the components of reishi and found they had a significant inhibitory effect against both herpes / cold sore viruses HS1 and HS2. This is particularly effective as there are no known side effects from using this fungi as a medication (although there are many auxiliary health benefits on top of fighting viruses).

I have a small cold sore infection on my lower lip which comes back every year or two. This year, I used reishi tea during the breakout, and it almost stopped it completely. I can testify that reishi has been by far the most effective treatment for cold sores. In my own case, the swelling of my lip goes almost completely down within 30 minutes of drinking the reishi brew. Nothing else I have tried has even remotely this strong an effect.

In animal studies, reishi has been shown to decrease blood glucose concentrations by 50%. A similar effect can be seen in human trials. In one 2004 study, diabetic patients were given either reishi extract or a placebo for 12 weeks. During this time, the reishi group experienced significantly dropped blood glucose levels. The research seems to indicate that the mechanism behind this effect is increasing insulin and the metabolism of sugars in the liver – although owing to the long and complex list of compounds in reishi, there may be other mechanisms behind this too. It is worth noting that reishi is adaptogenic, meaning it has the ability to both increase and decrease certain biomarkers like hormones or inflammation levels according to the body’s needs. As such, I wonder if it would increase blood sugar levels in a hypoglycemic person.

Along with the ketogenic diet, reishi is an extremely powerful intervention for combating diabetes, which is increasing yearly across the Western world.

I first started drinking reishi tea in 2013 when a forager-chef friend introduced me to it. I tend to make a full large pot once every week which I drink over 24 hours.

Reishi tea tastes extremely bitter, and could be loosely likened to a kind of black tea. In my experience, first timers usually dislike the potent taste of reishi tea, but learn to like it as time goes on – this was certainly the case for me. I personally find the taste refreshing and delicious, and enjoy reishi without any other ingredients.

When I drink reishi tea, I feel a sense of well being. I feel a sense of alertness similar to caffeine but without the jitteriness. I feel a general lifting of mood. I also get a general sense that some unspecified ‘good’ is being done to my body and mind. Of course, this is just my experience, and it is infinitely tied to my own expectations and placebo effect. Nevertheless, this anecdote should act as a data point for any of my readers interested in exploring supplementing with reishi.

As an interesting side note, I often serve reishi tea to my friends when they come to stay. Many of these friends have asked to take some reishi home with them as they connected to its healthy potency and wanted more. Several have asked me where my source of reishi mushrooms is from, and how to buy some. 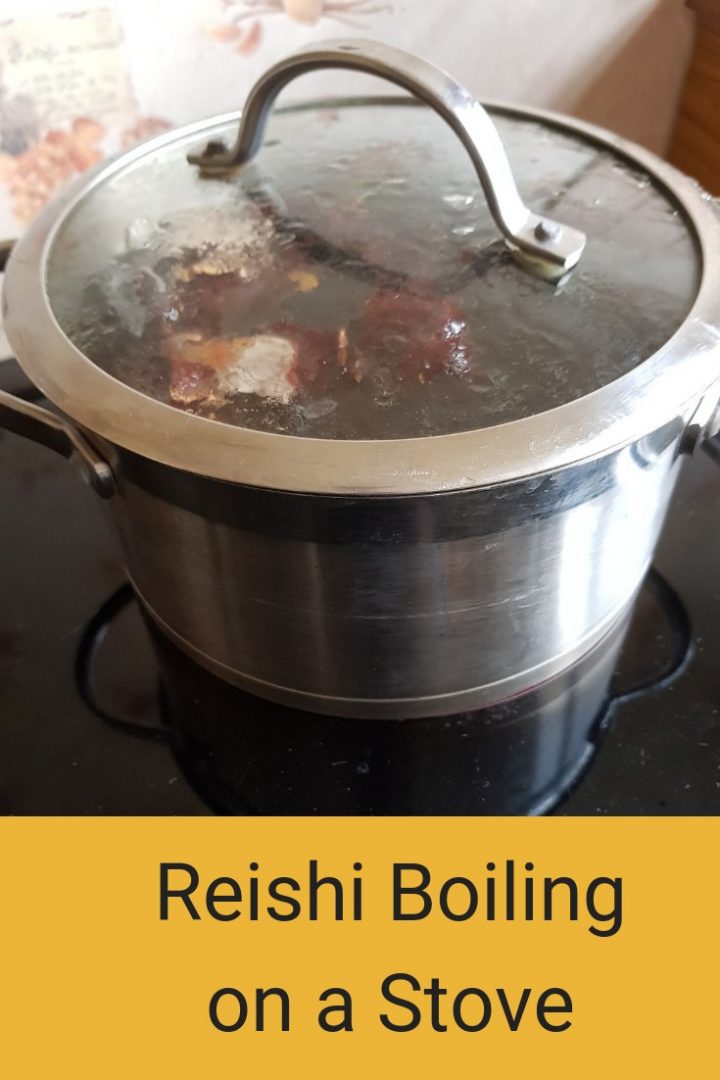 How to Prepare Reishi Mushroom Tea

Take one medium size mushroom and break it into coin sized chunks. Place the mushroom chunks into a large pot of water. I notice a much better brew when I use filtered water as opposed to tap water. Bring the covered pot to a boil, and then simmer on a low heat for 1 to 2 hours.

Reishi has a bitter taste, though it is delicious. You can add any combination of the following to the brew as it boils:

Reishi tastes fantastic warm or cold. Once your brew has cooled, store whatever you don’t drink in the fridge.

Where to Buy Reishi Mushroom

I buy whole reishi mushrooms from my local mushroom farm for £32 / 100g. The owners have rows of reishi mycelium growing inside their farm and it’s a real treat to see. You can also buy reishi powder from Amazon, though I don’t have personal experience using this. 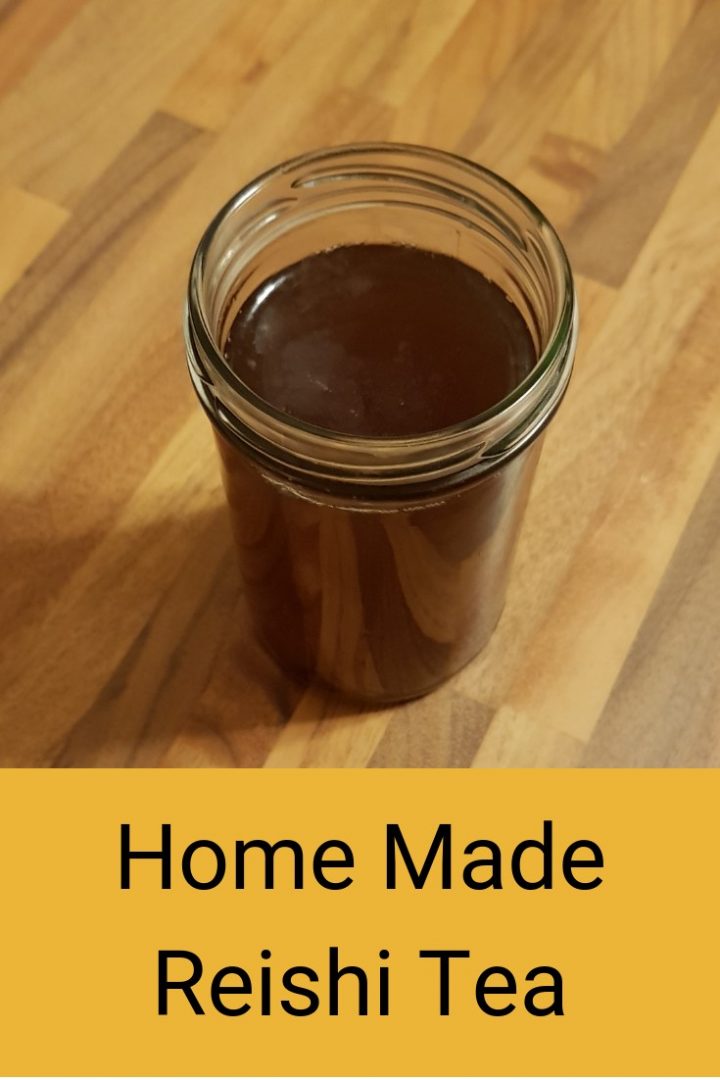